This award, established by resolution of the Board of Directors on February 12, 1954, is for an individual or organization whose contributions of a civic nature - whether administrative, legislative, or judicial - have aided substantially in pollution abatement in some field related to the mission and objectives of the Association. To be eligible for the award, individuals/organizations must have made a sincere, constant, and unselfish effort over a period of time and in a manner best suited to his/her own resources, to develop or increase interest in, or acceptance of, the cause of air pollution control and waste management for the betterment of the environment. The award is not limited to any specific area of endeavor. 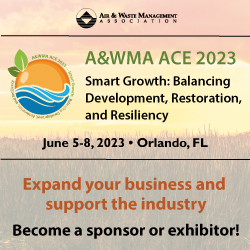