The second week of COP25 in Madrid begins with sessions on reducing GHG emissions, focusing on topics including carbon pricing, public health and air pollution, and the Paris Agreement.

On Monday, December 9, I attended a session regarding carbon pricing.  The overall focus of this session: Reducing Greenhouse Gas Emissions through Carbon Pricing: Recent Research, Analysis, and Experience.  The session was organized by the Harvard Project – an effort organized by Harvard University to develop and assess economic policies to address climate change.  The Project is headed by Dr. Robert Stavins, who provided the opening presentation and set the context for the discussion.  As Dr. Stavins discussed, many countries are studying pricing mechanism to implement their NDCs.  Indeed, Dr. Stavins noted that for countries with large, complex economies, carbon pricing will likely be an essential part of any meaningful long-term climate policy.

Dr. Stavins opened the session with a comparison of the most commonly deployed economic policy instruments (that lead to carbon pricing), namely carbon taxes or cap-and-trade programs.  An overall point of Dr. Stavins' presentation was that, whether countries seek to establish carbon taxes or a cap-and-trade program, how the policy or program is designed is more important than which instrument is chosen.

From an economic point of view, both systems are perfectly equivalent policies.  Both can incentivize emissions reductions, aggregate abatement costs, and can affect competitiveness among participants in the programs.  Both instruments can be designed to be nearly equivalent regarding raising revenue, imposing costs to emissions sources, and can result in distributional impacts.  Both, however, are significantly different with regard to the need for regulatory oversight (cap-and-trade requiring more oversight) and imposing administrative costs.  Cap-and-trade programs are also more complex and may not be as transparent as carbon taxes.

In reality, either carbon tax programs or cap-and-trade programs can be effective instruments in bringing about climate emission reductions, if designed correctly.  There are already dozens of such programs being implemented around the world.  Both types of programs can complement existing programs, such as energy efficiency and renewable energy programs.  More on Dr. Stavins' panel can be found by contacting info@belfercenter.hks.harvard.edu. 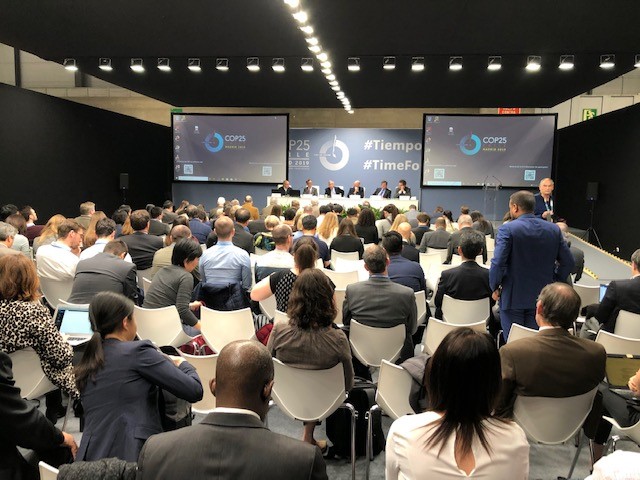 Panelists speak at the Reducing GHG Emissions Through Carbon Pricing session at COP25.

Zhang Xilang, from Tsinghua University, presented on China's emissions trading program.  This is a multi-regional program focused on the largest stationary sources (7,500 in total across China) of GHGs.  It covers eight sectors, including the electric generation, manufacturing, petroleum production, and refining and civil aviation sectors.  The threshold for participation is 26,000 tons of CO2 emissions emitted per year.  Caps are set by their federal government and emissions trading protocols are developed and implemented by both the federal and provisional governments.  China evaluated carbon taxes, but elected to go with an emissions trading program, largely based on their perceived complexity of carbon tax programs, issues surrounding how the revenues would be spent, and their perceived lower administrative cost of an emissions trading system.  The Chinese program is designed to be complementary of carbon tax programs that are implemented relative to buildings and new cars sold in China.   All of these efforts, taken as a whole, constitute China's NDC.

Raffaele Mauro (DG Climate Action) described the emissions trading system that has been developed and is being implemented in Europe.  The EU started with developing a carbon tax, but elected to develop a hybrid system of taxes and emissions trading program.  Three issues were highlighted that are critical in the design and implementation of emissions trading systems, based on the European experience.  They include the need for liquidity of allowances, the need for keeping in mind how investments or disinvestments are made relative to other social programs, and the impact of emissions trading on competitions among countries participating in the program.   This last point was stressed given that, under COP25, countries are being called upon to increase their action and ambitions.  The cost of control can vary widely among countries, and emissions trading programs can create competitiveness issues if not properly designed.

Another professor from Harvard, Dr. Joseph Aldy, presented a proposed carbon tax program for consideration.  Dr. Aldy had worked on the Carbon Tax Review as part of the Harvard Project.  As noted in his presentation, members in Congress have introduced legislation to explore the establishment of a carbon tax.  In the US, the proposed structure would establish a benchmark, where the tax is increased if the benchmark is unmet.  Issues regarding the carbon tax focus on the science behind climate change (how much do we know?), how much the tax should be, and resulting impacts on households and industries.  The approach would be an “act-learn-act” method towards policy.  The price per ton would increase over time, with review by the Administration and Congress.  Factors of review would include temperature goals, emissions goals, economic impact, and if the NDC is meeting its goals. The tax would increase if climate change impacts continue and the need for additional emissions reductions are necessary.

A Chilean Presidency representative spoke to the country's significant social unrest, and how a carbon tax imposed several years ago partially contributed to the upheaval.  There has been a massive growth in renewable energy facilities in the country; in 10 years, ¾ of their electricity will be generated by renewables (primarily solar). The purpose behind Chile's decision to enact the carbon tax was to fund educational reform, with $5/ton of CO2, referred to as the “green tax.” 90 percent of the carbon tax has been imposed on electricity generation, with some taxes on cars. The representative concluded that taxes should be used to mobilize the private sector and aid government policies – political feasibility is critical.  A tax should also be designed to reflect the environmental or social cost of carbon.  Again, design is imperative.  As of now, Chile is phasing out coal and the carbon tax should complement this effort.

Several questions were raised by the audience, relative to lack of acceptance (and often opposition) by EJ community groups to trading systems.  The panel struggled to answer these questions. How Considering Public Health and Air Pollution Can Raise Ambition on Climate Change

Next, I attended a very interesting session organized by the Climate and Clean Air Coalition.  Dr. Johan Kuylenstierna, from Stockholm, moderated the session and provided the opening presentation.  His presentation demonstrated that there is a close linkage between air quality and climate change; the same sources contribute both GHGs and air pollutants, and Short Lived Climate Pollutants (SLCPs) are linked directly to human health impacts.  Around the globe, black carbon – which can be a significant fraction of PM2.5 – has led to millions of premature deaths per year.  Dr. Kuylenstierna called for integrating air pollution control programs with GHG reduction efforts to generate the co-pollutant benefits. 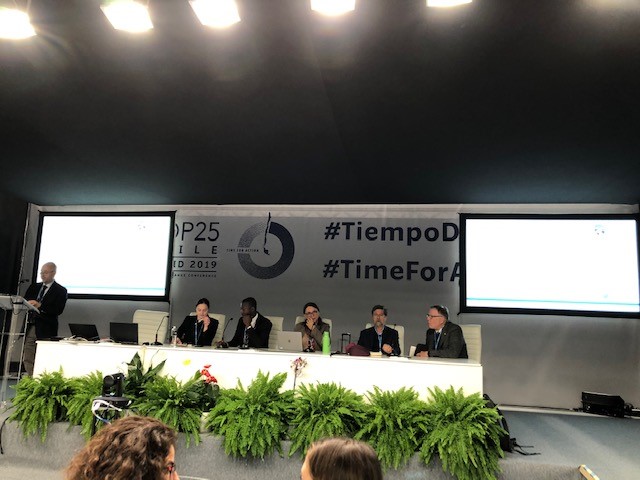 Speakers from Cote d'Ivoire, Nigeria, and Mexico provided examples of how they have sought to develop and implement emissions reductions programs that achieve co-benefits.  Indeed, the speakers indicated that support for their climate reduction efforts has been based on making the case for the health benefits of doing such.  In Mexico, specifically, there is a concerted effort to harmonize their air pollution and climate change programs, with their NDC based on reductions in black carbon and the health-related outcomes.

George Thurstan, from New York University, provided statistics on the reduction in health impacts when coal-fired power plants have been closed, as documented in several states.  Specifically, he showed that once other factors have been controlled, reductions in health impacts in several cities have been linked to reductions in PM2.5.  He reviewed the state of science relative to health impacts, and how PM2.5 is linked to cardiovascular impacts, stroke, and cancer.  He focused on PM2.5 from coal-fired power plants and how the heavy metals within PM2.5 cause oxidative stress.

Kate Moss, from the World Resources Institute, summarized the panel discussion with the following conclusions: Subnational Strategies in North America for Meeting the Paris Agreement In the final part of the day, I attended and participated in a session of representatives from subnationals (states and Canadian provinces), including California, Washington, Maryland, Wisconsin, and British Colombia.  The session was organized by the Climate Action Reserve and Climate Action Registry.  The purpose of the session was to discuss the efforts of these subnationals, given that the US has pulled out of the Paris Agreement.  Instead of presentations, panelists participated in a conversation-style platform with questions posed.

All of the representatives reiterated that “They're Still In,” and that progress is being made to reduce GHGs in their jurisdictions.  Most have reduced GHGs in their electric generation sectors, but all are falling short in achieving reductions in the transportation sector.  Collaboration (with affected parties and stakeholders) has been the key to success in their efforts.  Every speaker cited examples of successful collaborative efforts.  However, several speakers stated that future cooperative efforts will need to include a racial equity lens to create a more effective framework.

When asked about the most important policies enacted, several speakers cited their renewable portfolio standards, energy efficiencies standards, and their successes in implementing renewable energy systems throughout their jurisdictions.  The most difficult areas (in addition to transportation) that will need to be focused on are the agricultural and natural lands sectors.  The existing building stock was also raised by several speakers, as the next focus of emissions standard setting efforts.

Finally, when asked why there is not more alarm by the general public over climate change, most speakers agreed that the majority of people focus on the reality of their daily lives – many people have a difficult time focusing on impacts that will potentially occur several decades from now.  However, several speakers noted that this is changing with the recent wildfires out west and flooding in the eastern US.

Thank you. This is useful.