COP 26 — Wednesday's sessions at COP focused on highlighting the 2021 IPCC Report, along with mitigation and adaptation funding. Information is also provided on the United States' Nationally Determined Contribution (NDC).

The sessions on November 3 were almost exclusively devoted to highlighting the 6th Annual IPCC Report on climate change and issues surrounding the funding and implementation of the $100 billion/year mitigation fund to assist developing countries in developing their NDCs and to mitigate the effects of climate change on their populations.

The information presented below concentrates on segments from the 1800-page 2021 IPCC report, which can be accessed in its entirety at www.ipcc.ch/assessment-report/ar6. The Intergovernmental Panel on Climate Change (IPCC) is the United Nations' body for conducting periodic scientific assessment of the world's change in climate. Over the years it has improved its analyses to the status of being able to determine human caused effects and world history of global temperatures going back a couple of million years. The IPCC also estimates impacts and risks from climate change projections, tabulates annual GHG emission inventories and develops options for adaptation and mitigation.

Wednesday's session was opened by the Subsidiary Body of Scientific and Technological Advice (SBSTA), function sanctioned by Article 9 of the Paris Agreement. Several speakers presented segments of the IPCC 6th Annual Report. Some of their statements describing the report's findings included:

“Current warming is unprecedented over the past thousands of years.”
“Human-caused radiative forcing is increasing.”
“The level of CO2 in the atmosphere is now unprecedented in the last 2 million years.”
“The last time there was an increase in temperature of 2.5C was 3 million years ago.”

Here are a few of the graphics from the IPCC 6th Annual Report (click to enlarge): 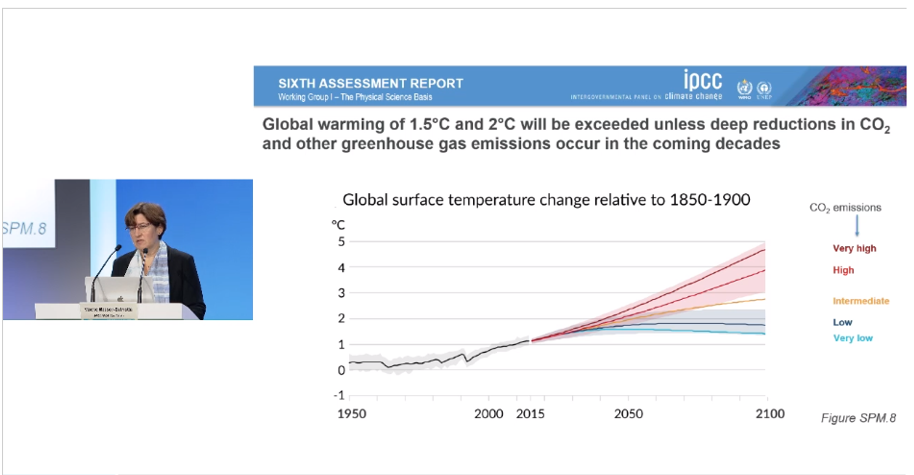 This graph depicts historical surface temperatures and projects to the year 2025. Statistics presented to the left of the graph indicate where we are now in 2021. This graph presents the unfortunate glacial pattern since 1950.

In addition to the IPCC 6th Annual Report, the World Meteorological Organization (WMO) presented its Provisional State of Climate Report for 2021. There were several speakers, including from the China National Climate Center, the IOC Secretary, the World Geospatial Industry Council (satellites) and others. Presentations by the World Ocean Assessment Program were also made. Some of the quotes were:

“The last 7 years are the warmest on record.”
“Negative mass balance of reference glaciers for the last consecutive 33 years has occurred.”
“Oceans hold 100 times the heat of the atmosphere and 50 times the carbon.”
“Oceans used to absorb 40% of fossil fuel carbon emissions.”

Sessions focused on funding, how to allocate funds and the need for this important part of the Paris Agreement (Article 6) to get going. Many developing countries and especially island nations are concerned time is passing by without much being resolved to help them with the apparent rising sea levels that will destroy their economies and populations.

Discussion of the need for standardized National Adaptation Plans (NAPs) produced ideas such as the following from the presenters: Spending $100 billion per year is apparently a daunting task; based on a presentation at COP24, these monies may be used for any purpose by develping countries including development of their NAPs. 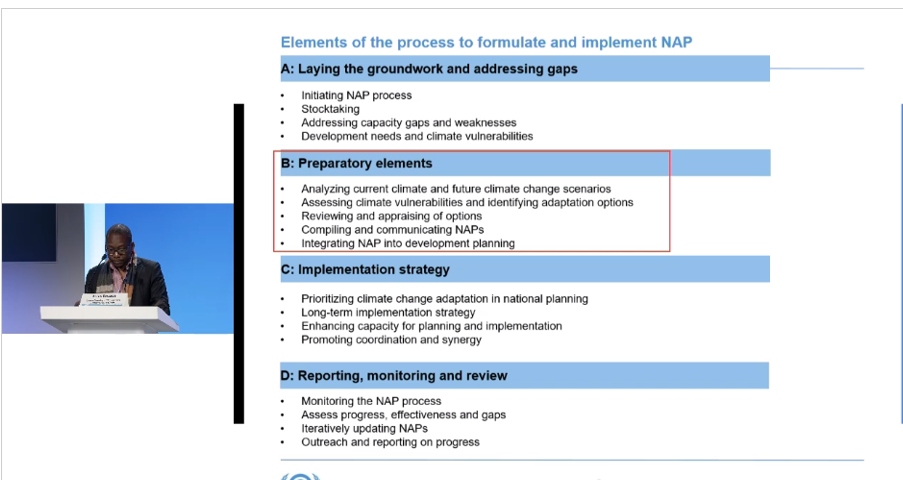 Here is a summary of the United States' Nationally Determined Contribution (NDC) to meet the Paris Agreement target of 1.5C and/or 2C temperature increase goal. The entire US NDC and that of the other signatories to the Agreement can be found at www.unfccc.int.

The US NDC is detailed by economic sectors as follows:

Electricity Transportation Buildings Industry Agriculture Non-CO2 Reductions
The next few days will focus on finalizing plans for protecting oceans, continuing to refine NDCs and redefining meaning of carbon-neutral, zero carbon and how to monitor progress uniformly as we continue to the year 2030.
About the Author: Mike DeBusschere, P.E. was President of A&WMA from June 2000 through December 2001. Before being elected President, he served as Section Council Chair and in several Board and leadership positions. He is a licensed chemical engineer and is President of Kentuckiana Engineering Company, an environmental consulting firm in Louisville, Kentucky since 1996. Before entering private practice, he was Acting Air Branch Chief of Region IV EPA, and led EHS regional programs at Camp Dresser & McKee, ERM and TRC. DeBusschere is an A&WMA Fellow.