Arriving in Glasgow, Scotland for Week 2 of COP 26

COP 26 — A&WMA delegate Brian Bunger details his arrival in Glasgow, Scotland for Week 2 of COP, along with the first sessions he attended on adaptation, loss and damage related to climate change.

8 November 2021
Reported by: Brian Bunger, A&WMA President
A&WMA Observer Representative is On-site at COP26!
After an uneventful but delayed journey, I arrived in Glasgow on Sunday evening (7 November) just in time to collect the keys for my rented apartment and find my way to the location to pick up my COVID self-test kit for the week. I also managed to find a decent spot for dinner still open!

As part of its COVID-19 safety protocol, the UNFCCC has established a bespoke testing process in coordination with the UK National Health Service (NHS) that requires daily self-testing and reporting a negative result before access to the conference venue for credentialed attendees at the Scottish Event Campus (SEC) known as the Blue Zone, including to collect conference badges. The tests are antigen tests using a Lateral Flow Device (LFD). I will spare you the details, but the LFD testing was easy and went smoothly. Alas, reporting the result, not so much. The online reporting portal would not register the negative result after multiple attempts. When I finally reached a live NHS representative, however, the result was logged and I received my notification allowing me to go to the SEC to enter the COP26 venue. 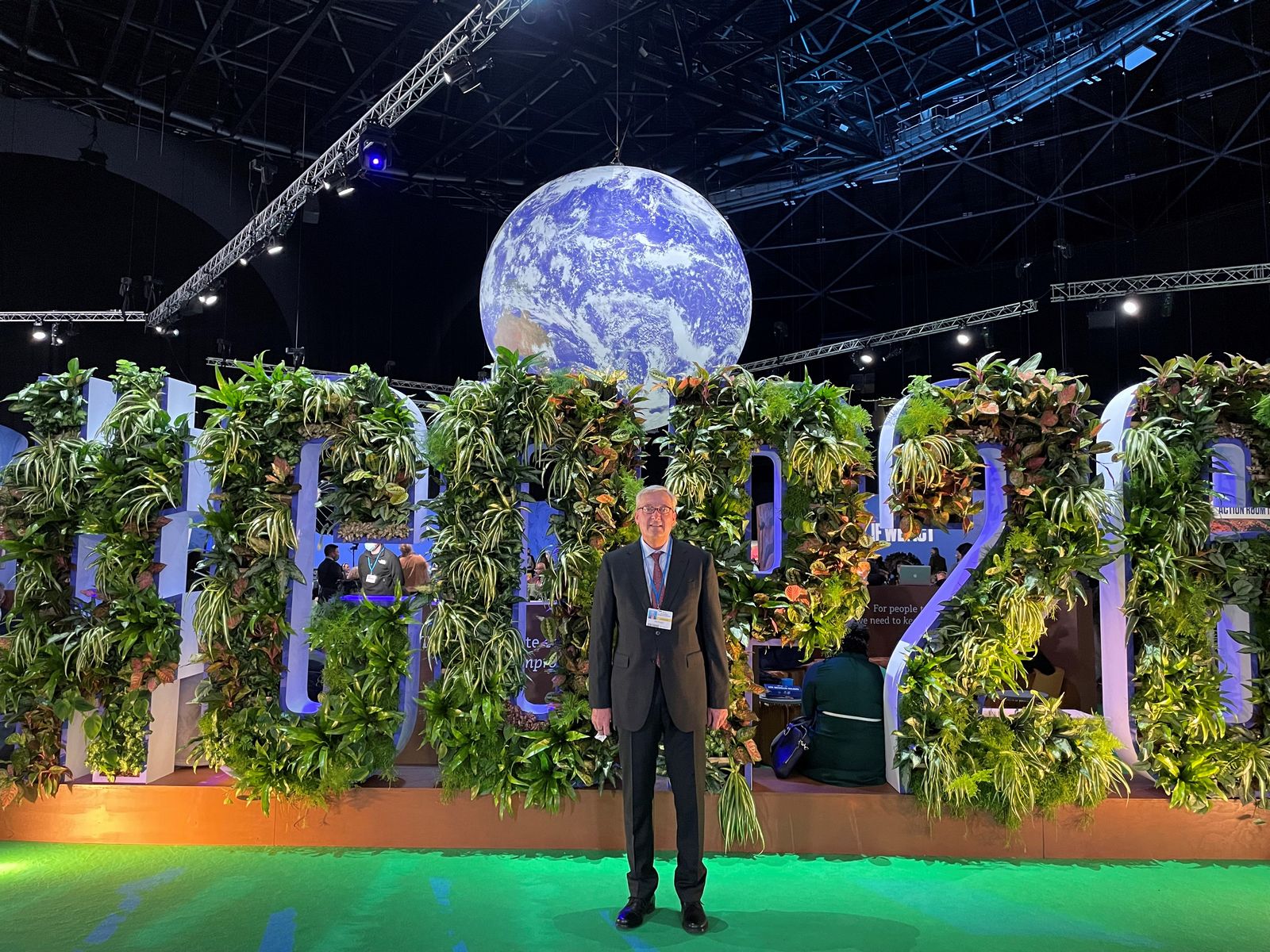 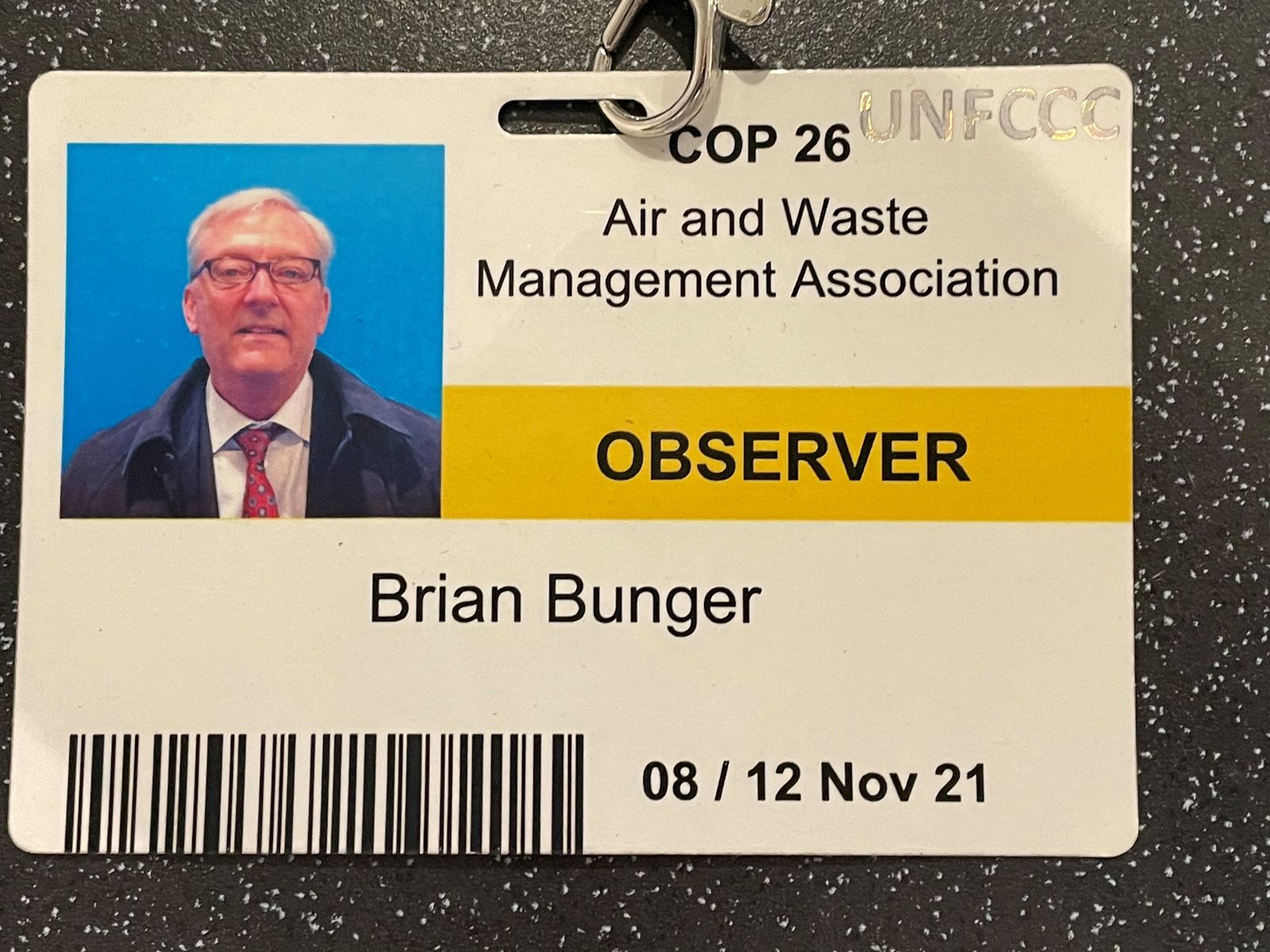 Although Glasgow is a compact city, many of the hotels and other places to stay are some distance from the SEC. Due to the size of COP26, hotel rooms were impossible to come by, hence my rented apartment. (There are actually a few hotels on the SEC site, but the rooms there seem to be taken by the heads of state, and other party delegations.) The rest of us (observer representatives, the press, and the like), if in Glasgow, seem to be staying in the City Centre neighborhood, or like me, the Merchant City area. Based on a few conversations with other attendees, others seem to be mostly coming in from Edinburgh. As a result, in coordination with the Scottish and UK governments, the UNFCCC established a shuttle bus running between the City Centre area and the Blue Zone at the SEC as well as the publicly accessible Green Zone at the Glasgow Science Centre. The shuttle buses are crowded, but efficient. 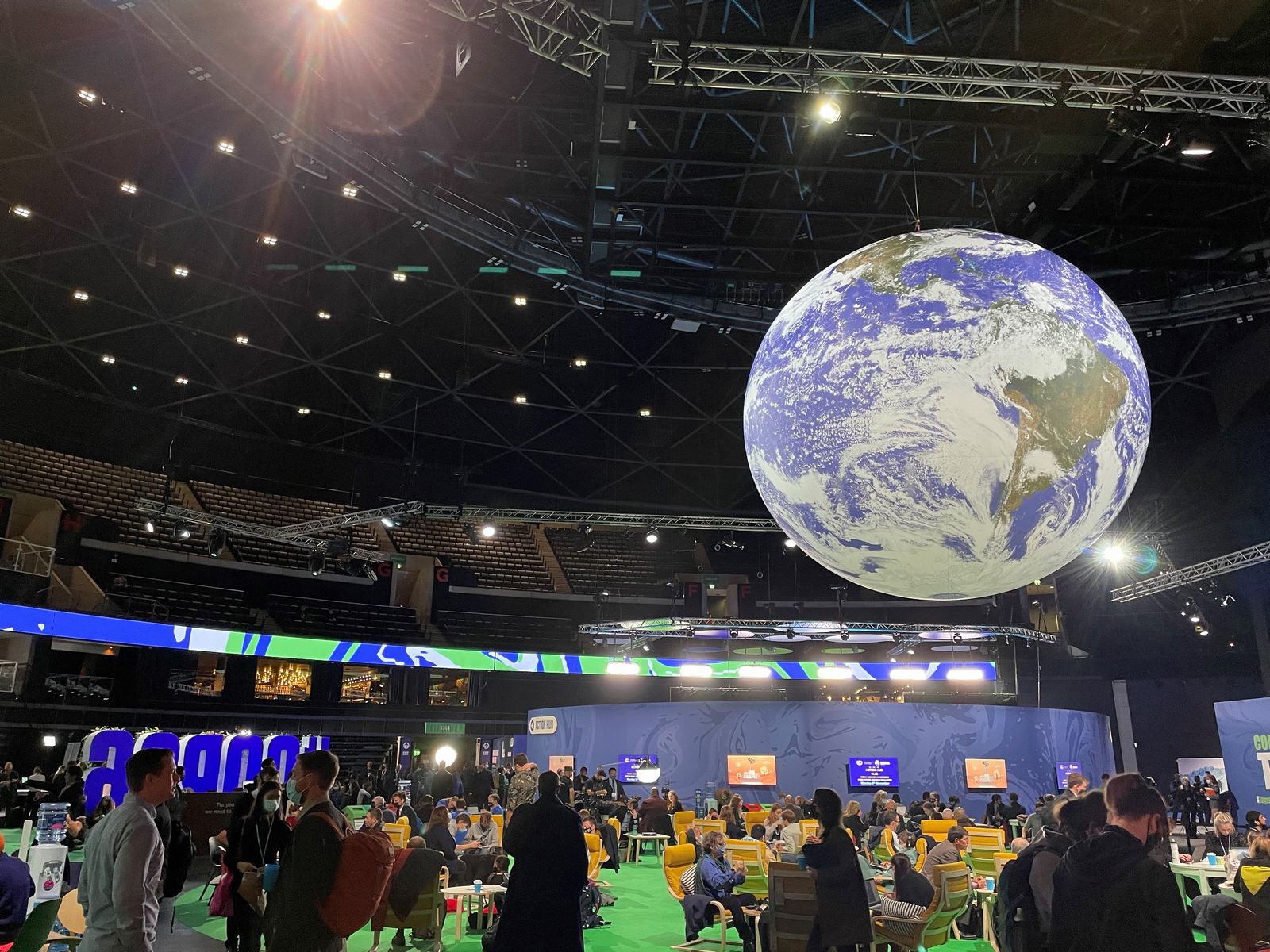 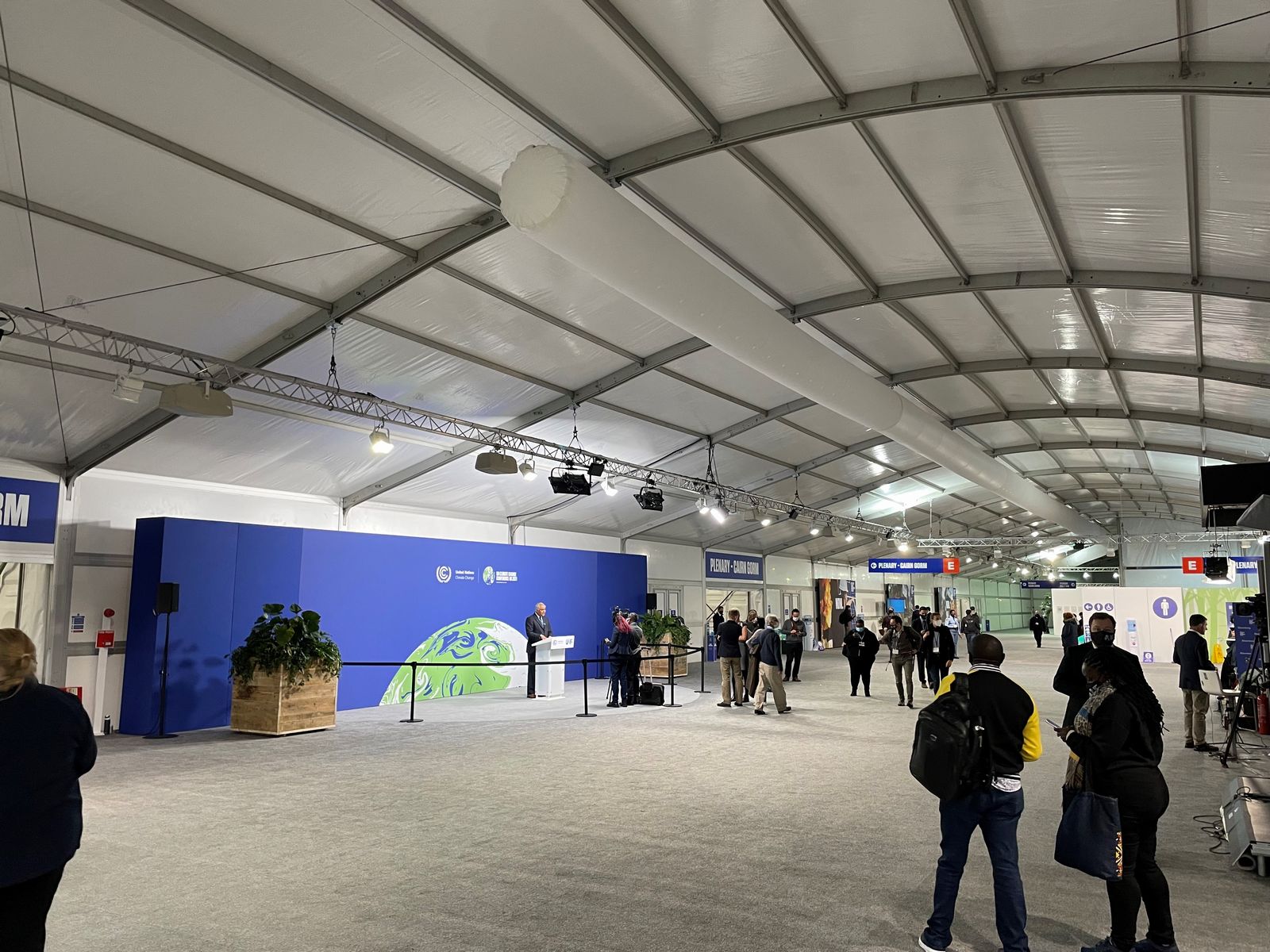 COP26 is an enormous event. Heading into the conference, the UNFCC had indicated that it anticipated 25-30,000 attendees. I have not been able to confirm this, but I heard from one fellow observer representative that the actual number is closer to 50,000!  After being at COP26 today, that number does not seem off. And all of those people are attending against the backdrop of the COVID-19 pandemic and recently rising case counts in much of Europe and the UK.

Very early last week, when COP26 opened, registered attendees began receiving texts and emails indicating that the SEC was reaching capacity and imploring attendees to restrict time in the blue zone to the extent possible. Those alerts continued today. The Code of Conduct for COP26 attendees requires face coverings at all times on the shuttles and in the conference venue, and I saw excellent compliance with that requirement. The Code of Conduct also requires social distancing as much as possible. That requirement was not as well observed. 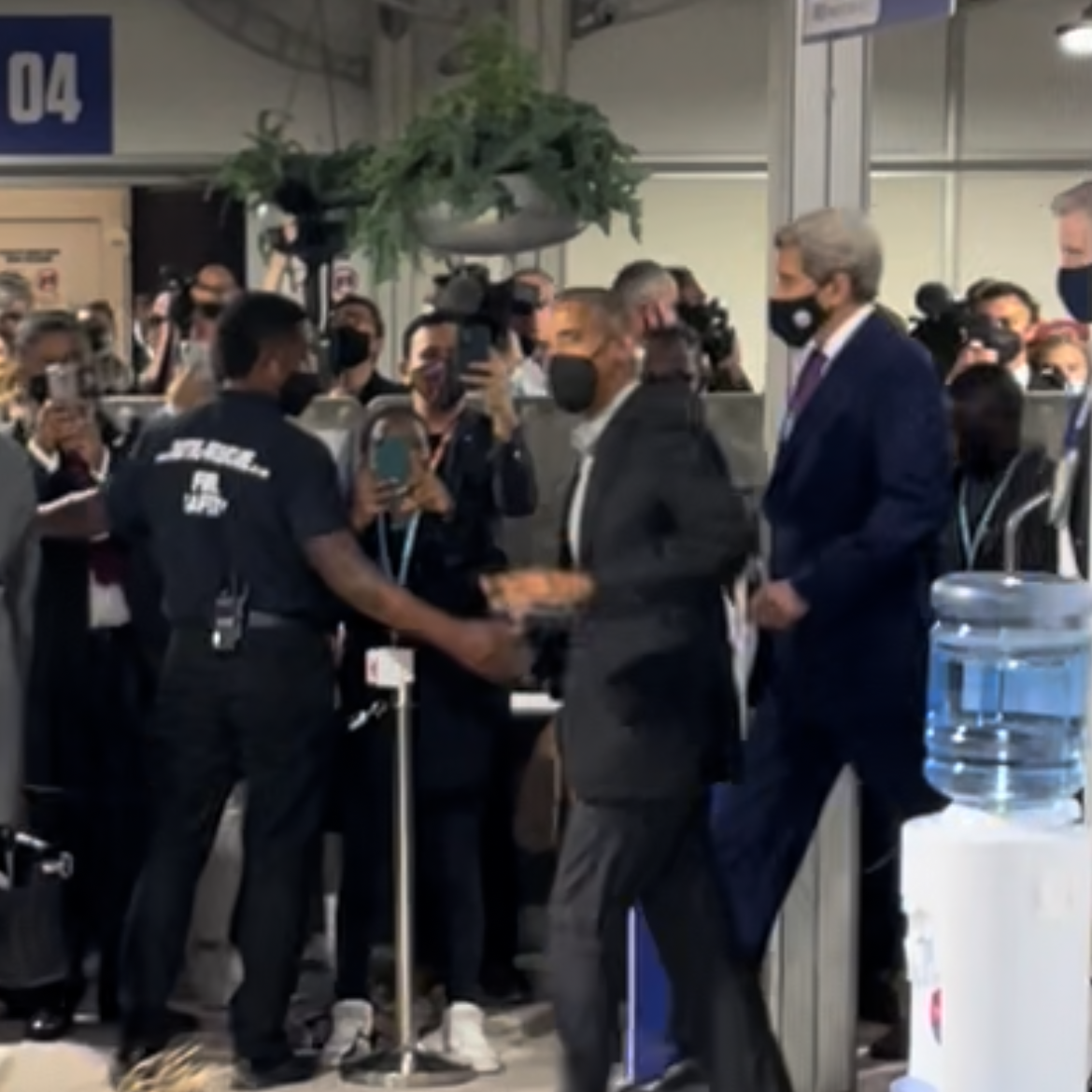 Today was largely dedicated to orienting myself to COP26. Having spoken to many people who have attended past COPs, I was aware that these are huge events with a dizzying array of meetings, presentations, and side events happening constantly. In addition, there are displays of art and technology and each party and many observer organizations and other participants have booths and offices in the Pavilion. I walked through much of the conference space (my fitness tracker was thrilled with me) and I think I can now find the key meeting rooms as needed. We shall see.

For those of you wondering, no, I did not get to attend President Obama's remarks. Tickets were required for that event, and only 20 tickets were allocated to the more than 1600 NGOs present. I did, however, see Mr. Obama arrive. Sessions on Adaptation, Loss and Damage
The UNFCCC Presidency has established daily themes for COP26. The theme today was “Adaptation, Loss and Damage.” I attended two very interesting sessions this afternoon and evening on those topics. 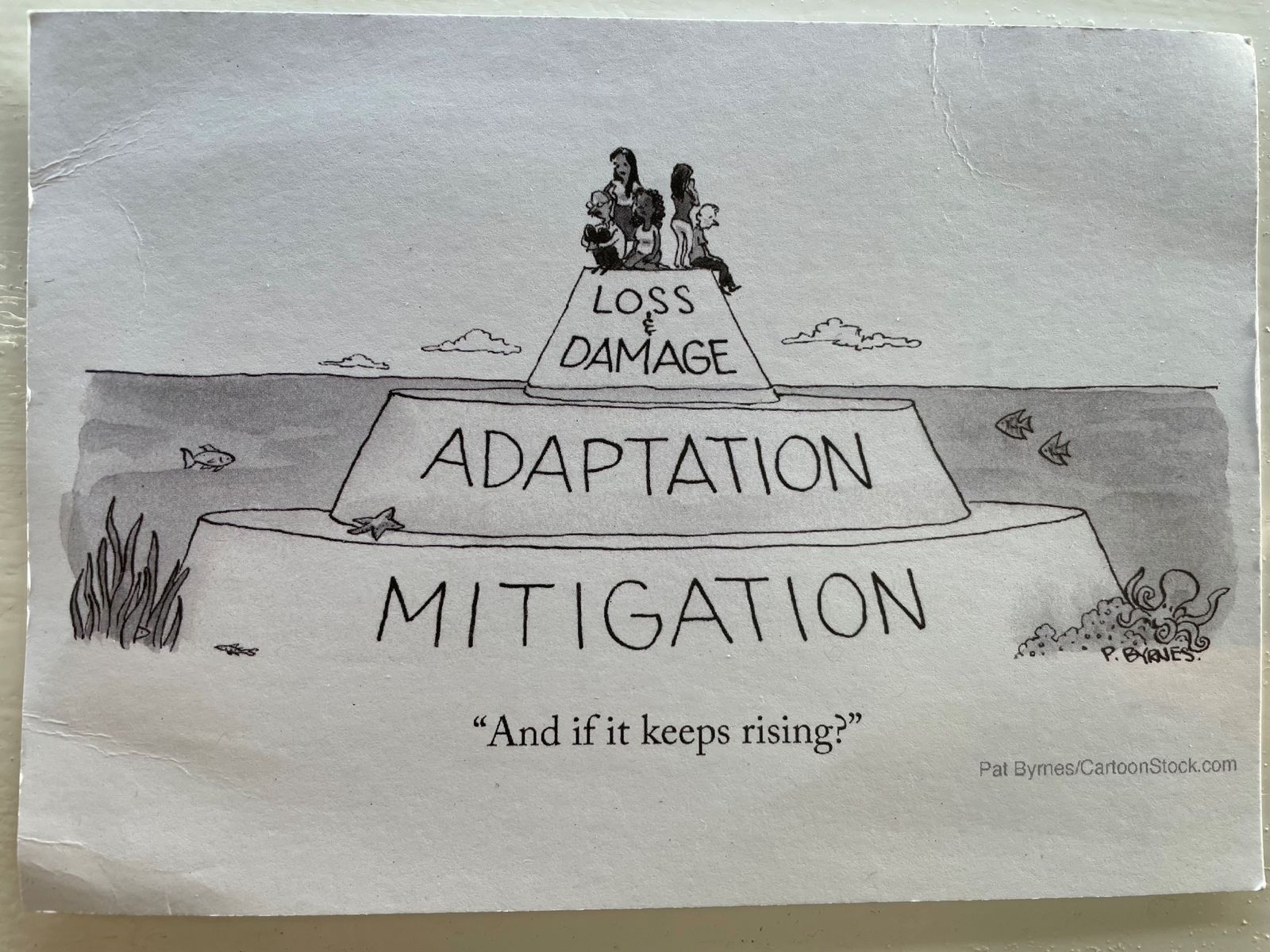 The first focused on loss and damage related to climate change. There is wide recognition, of course, that the effects of climate change are felt unequally.  All too often, impacts are happening in places and to people who have had essentially no role in contributing to the man-made emissions causing climate change. This session on loss and damage followed a unique format. During prior COP negotiations on loss and damage, professional cartoonists had participated to create cartoons depicting some of the frustrations negotiators were feeling about progress on addressing loss and damage. The session was an interactive session with attendees asked to share their thoughts and reactions to several of the cartoons that had been produced from that meeting.

There were a couple of presentations as well, including remarks by Barbados Prime Minister Mia Mottley, who emphasized the need to follow the science and implement evidence-based solutions. A couple of comments from Prime Minister Mottley's talk caught my attention. First is her perspective that the battle lines for loss and damage lie between the Tropics of Capricorn and Cancer. To me, this well distills the impacts and concerns of island nations about what they are experiencing and foresee from climate change. Second, in discussing the critical need for funding the UN Loss and Damage fund by fossil fuel producing and consuming nations, Ms. Mottley made the point that in her view, “asking island nations to pay insurance premiums for possible damage from climate change is like requiring all insurance for car accidents to be covered by the victims – it is immoral, and it is wrong.”

A second presentation in this session was from a group in the Solomon Islands. This presentation emphasized some important points about adaptation. Adaptation to climate change for many peoples is not simply a matter of moving somewhere else or finding new resources for ones lost. In many cases, where and how people live is closely tied to who they are. So, when their village is inundated by sea level rise, or the fishery they depend upon collapses from climate impacts, their social and cultural identity may be at stake, or they may be forced into conflict with others for their needs. These are effects that no amount of funding will address, making even more important that we work to limit temperature rise to avoid some of these most dramatic effects.

The second session was on Building a Climate Resilient World. This session consisted of a series of video presentations of climate resilience projects from around the world, including, among others, the moveable sea walls that protect the port of Rotterdam, a highway reconstruction and fortification project in Belize, and a flood control and river preservation project in Nepal. Panelists offered observations and perspectives on these projects, emphasizing the importance of following the science and developing technologically feasible designs, but incorporating community perspective in designing resilience projects rather than a top-down approach. Each of the showcased projects provided important benefits beyond merely preserving or enhancing a physical asset.

As one example, the highway project in Belize was seen by the local community as enhancing access to medical care and improving commercial access to some areas, meaning enhanced job and educational opportunities. That theme played out throughout the examples presented – resilience projects should not just preserve the status quo but improve conditions in ways desired by the communities involved. Each of the projects provided examples of what can be accomplished, much of which could be translated to other locations. One of the panelists said that he no longer refers to frontline communities in climate change as “most vulnerable,” but instead emphasizes the positive role the communities can play in improving their lives and providing examples for others by referring to those communities as “First Adapters.” Another panelist observed that in resilience planning and adaptation, the Global South has much to teach the Global North.

In the summation comments by panelists in this session, a couple of comments stood out as thoughts we should all bear in mind going forward. One was that we should not allow ourselves to be slowed in addressing resilience projects by the search for a list of things that everyone should do – one panelist referred to this sort of delay as the “tyranny of best practices.” Instead, we should seek to make such projects livable and act on them. The second powerful point that emerged was the urgency of addressing resilience projects. One panelist simply said, “this is the decade we need to deliver.” 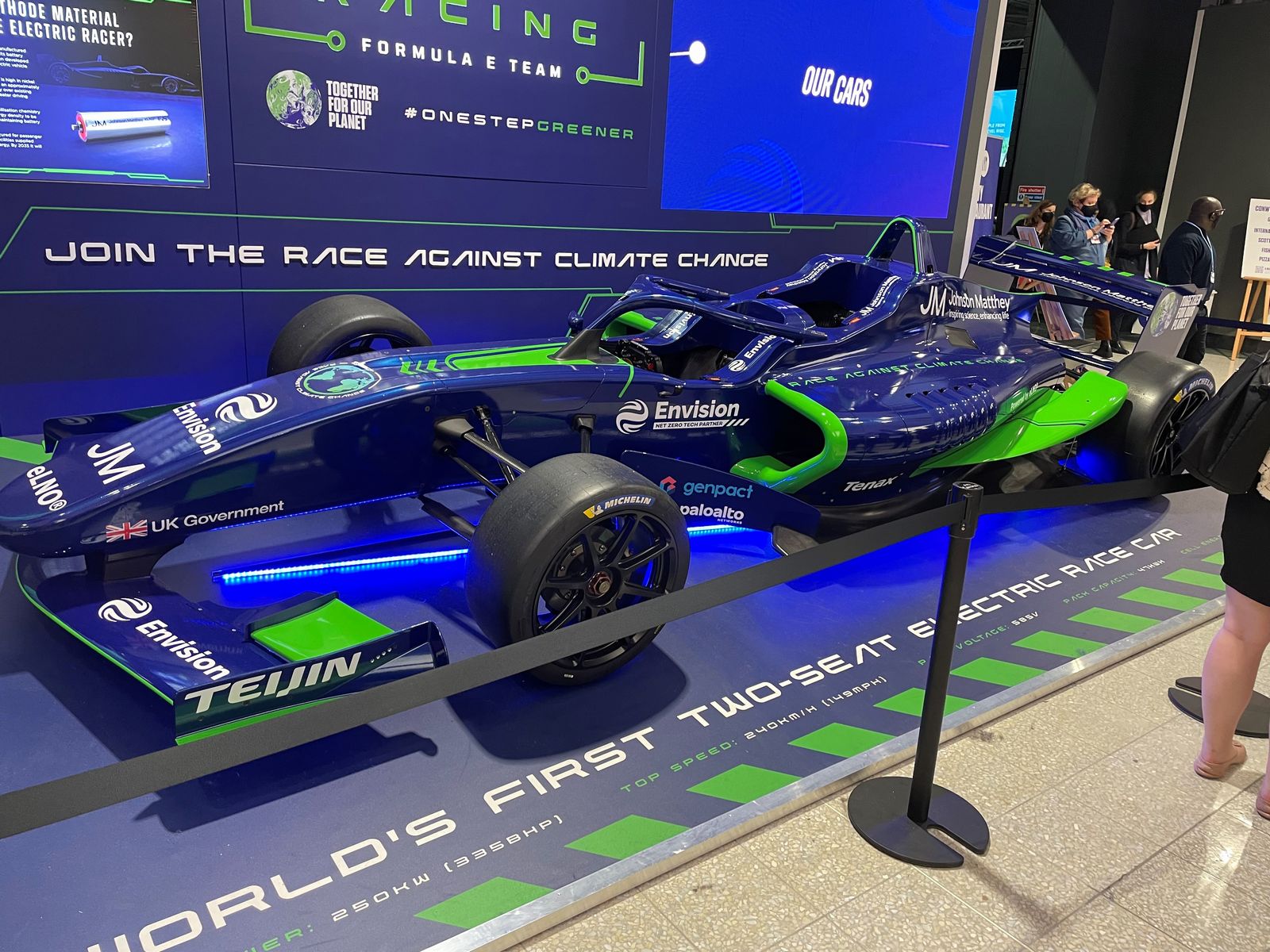 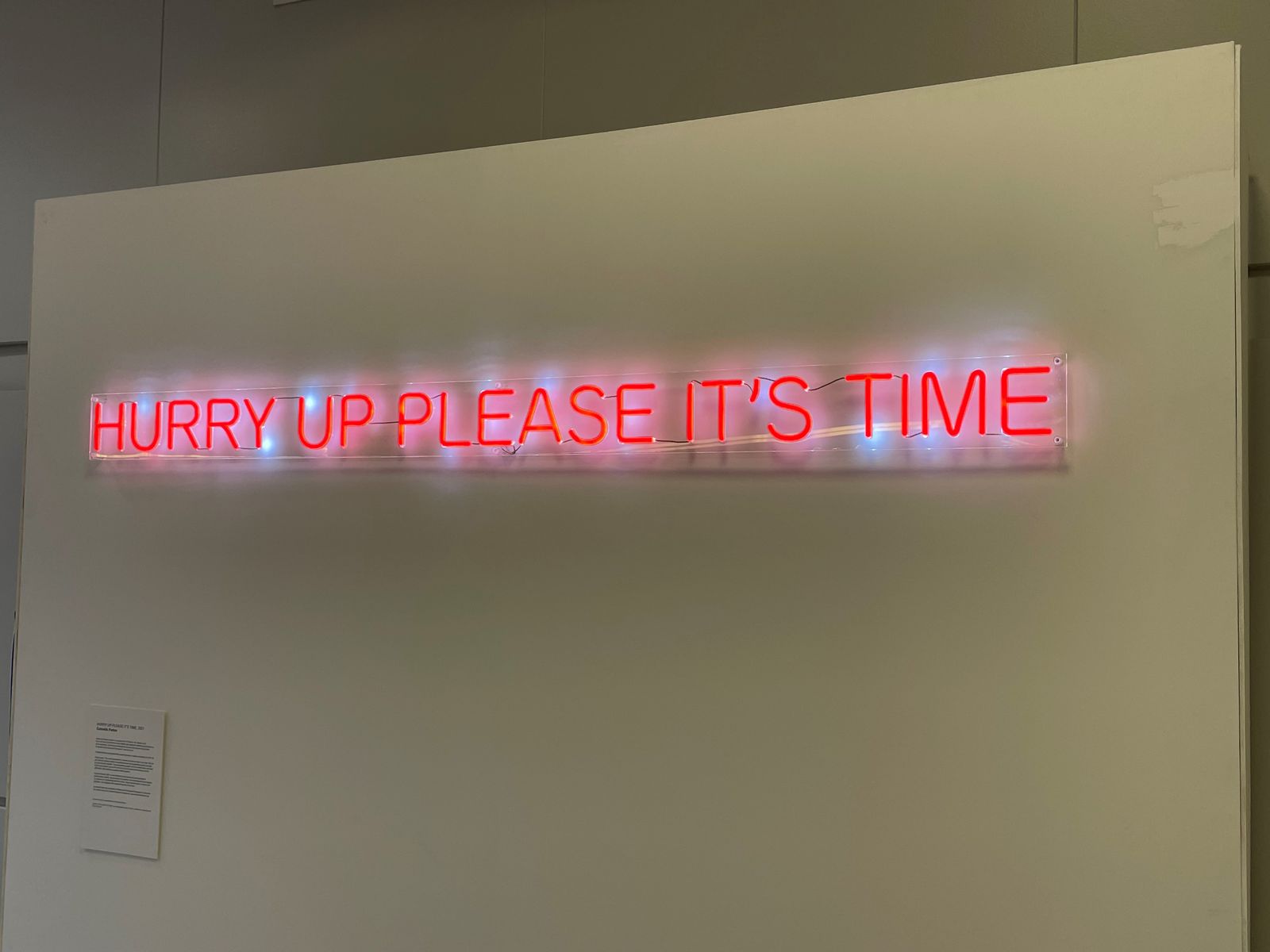 Thank you for the well written observations. I enjoyed reading your observations and your editorial on the issues. Keep up the good work. Looking forward to reading more.