COP 26—A busy day at COP 26 includes highlights of the transportations sessions, followed by the release of the draft text of the cover for the decision document that will encapsulate what is agreed to at the end of the conference, and the surprise joint United States-China Declaration on
Climate Change. 11 November, 2021 on site at Glasgow by Brian Bunger, A&WMA President
November 11 was Transportation Day at COP26.  The schedule includes sessions on a number of transportation topics of interest.  These sessions have been somewhat eclipsed by the bookend events of the release early this morning of the draft text of what is being referred to as the “cover” for the decision document that will encapsulate what is agreed to at this COP, and the surprise joint United States-China Declaration on Climate Change at the end of the day.  More on these developments below. 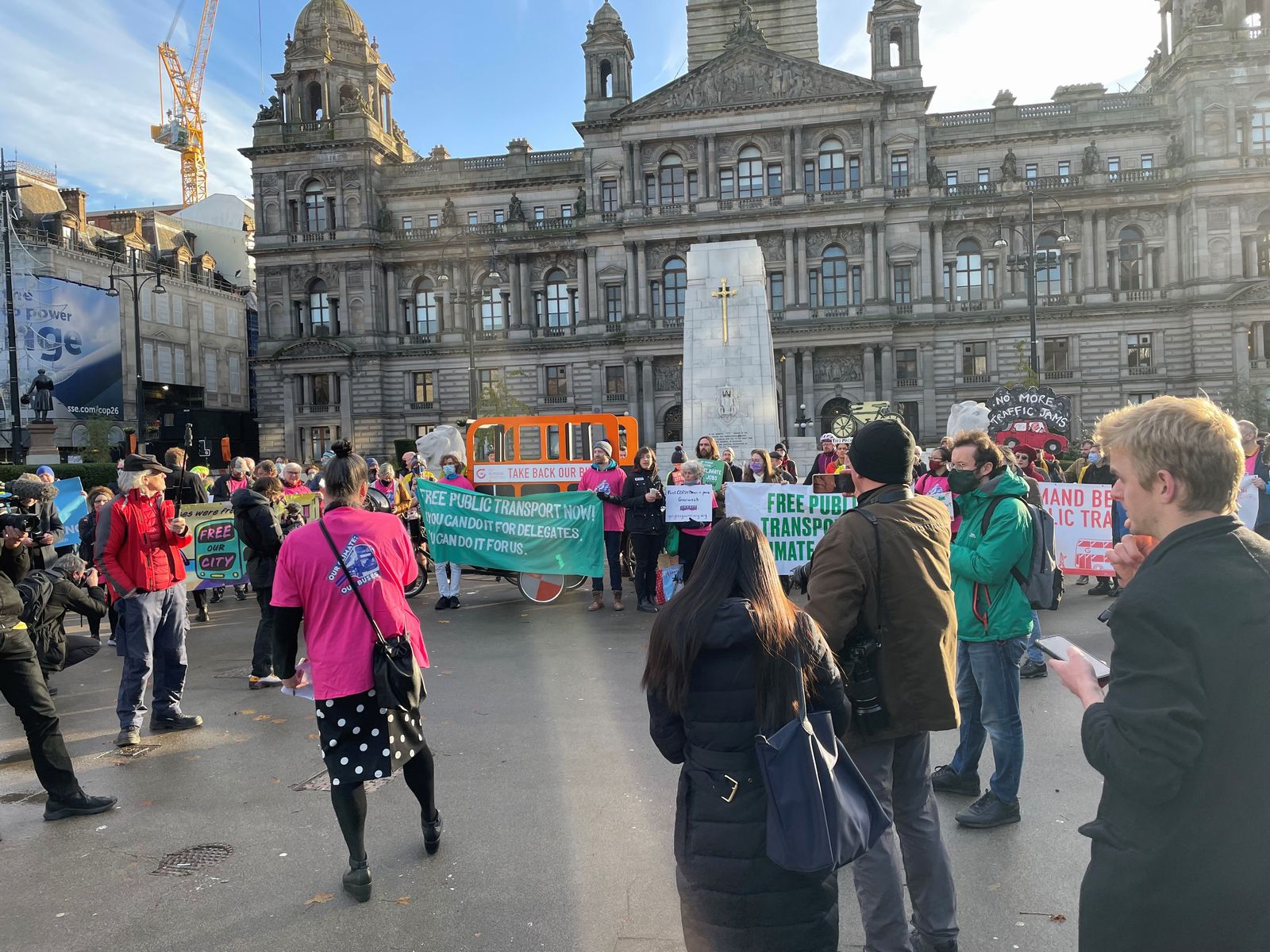 On my way to the conference this morning, I ran across a small protest in George Square calling for free public transit and referencing the provision of free transit to COP26 delegates.  A small reminder that there is always another perspective. Aviation Emissions
Another interesting session covered the International Aviation Climate Ambition Coalition.  One of the speakers at this session was US Secretary of Transportation Pete Buttigieg discussing the US Aviation Climate Action Plan.  According to his presentation, the Plan aims for net zero aviation emissions by 2050.  According to Secretary Buttigieg, Efforts are underway to produce 3 billion gallons of sustainable aviation fuels by 2030.  The Department of Transportation has also allocated USD 200 Million to advance technologies to reduce use of aviation fuels and address engine noise.  Secretary Buttigieg also discussed the recently passed infrastructure bill and pointed out that it includes funding to electrify seaports, as well as for modernizing aviation.  Beyond advances in technology and fuels, the Aviation Climate Action Plan includes efforts to offset aviation emissions through agreed protocols.

Draft Cover Decision Text
Just before 6:00 this morning, the COP Presidency released the first draft of the text of the decision document that will embody the agreements reached at the end of COP26.  The draft is 7 pages long and, in addition to almost a page of preamble language, includes 84 numbered paragraphs under a series of headings – Science, Adaptation, Adaptation Finance, Mitigation, Finance technology transfer and capacity-building for mitigation and adaptation, Loss and Damage, Implementation, and Collaboration.

The response to the draft text is decidedly mixed.  Although the parties were pleased to have a draft relatively early in the process and many identified positive aspects, there clearly is much work left to do.  Important inclusions in the draft text include a provision calling on parties to phase out coal and subsidies for fossil fuels (this was a topic left out of the Paris agreement and has long been sought by several parties and activists).  There is also language recognizing the science indicating that the earth has already warmed by 1.1° C, that commitments thus far are not sufficiently ambitious, and that urgent actions are needed to keep temperature from rising to more catastrophic levels.

Another area of concern, especially for developing and island nations is the climate finance and loss and damage provisions.  These provisions are necessary to assist those experiencing the worst impacts of climate change but have not contributed to the problem and do not have the resources to address the impacts.  These parties continue to be frustrated that the commitment made in 2009 to assist nations who are already experiencing the effects at the level of USD 100 Billion per year by 2020 will be delayed further if the draft text is adopted.

There appears to be some disagreement, too, with the draft text's calls for Nationally Determined Contributions (NDCs) (nations' commitments to emission reductions needed to limit global warming) to be updated ahead of the next COP in 2022.  The Paris agreement calls for NDCs to be adjusted every 5 years (this is often referred to as the “ratchet” mechanism) and COP26 was to be the first test of that mechanism.  Given the state of the science, it is clear, as noted above, that existing NDCs are not sufficient.  More frequent updates are likely called for, but not all parties are onboard.

These and other issues will continue to be negotiated among the parties through the end of COP26, scheduled for Friday November 12.

United States-China Joint Declaration
Late in the day, the United States and China announced a joint declaration committing to work together to raise ambition to address climate change and have agreed to a basic framework on how to work together.  The Joint Declaration contains strong statements on what United States Climate Envoy John Kerry referred to as “the alarming science” on climate change, the existing gap in commitments to address it, and “the need to take strong action to close the gap in this decisive decade.”  The Joint Declaration commits both nations to a series of important actions immediately, including working to eliminate methane emissions, as well as to phase down unabated coal emissions within this decade and as fast as achievable.  Both countries have also agreed to enforce existing laws on deforestation.  They have also agreed to work toward a successful COP26, including promoting ambition in emission reductions, accelerating climate mitigation, and address climate finance and support for adaptation in developing countries.

The general response here to the Joint Declaration appears to be positive.  There is no question that having the two largest emitters cooperating to address climate change is a positive development.  As Mr. Kerry said at the press conference announcing the Joint Declaration, “on climate, cooperation is the only way to get this job done.  This is not a discretionary thing.  This is science and math and physics that dictate the road we have to travel.  We cannot reach our goals unless we work together – all countries.  And China and the US as the two largest emitters in the world, both have to show the way.