December 4 at COP25: Getting into the groove

A&WMA delegates reports on a major technical session featuring key highlights from the 2019 yearbook from the UN and Marrakech Partnership for Global Climate Action with targets for 2050. Additional sessions covered carbon neutral transitions and standards, and a forward-looking session on the Global Methane Alliance.

4 December 2019
I can confidently say we've settled into our COP routine at this point. We grab the train out of town, choose between the many sessions that are going on, manage to fit lunch in from the cafeteria at some point, and then take a very crowded and sleepy train ride back into town in the evening.  Much like Katowice last year, Madrid has been taken over by COP25.  On nearly every train, you see someone with their UNFCCC badge on.  At every bar, there is someone talking about COP.  And, whether on TV, in the Royal Palace, or on a storefront along Gran Via, the COP25 logo is everywhere.  It's very cool to be part of something so big, both for the Association and us personally.  Thank you to those Sections and Chapters that provided financial support to help offset the costs associated with this journey.  And thank you as well to each of the members that provided feedback on delegates, COP content, and blogging mechanisms.  We hope you are enjoying our reports back on everything we are taking in here in Madrid. 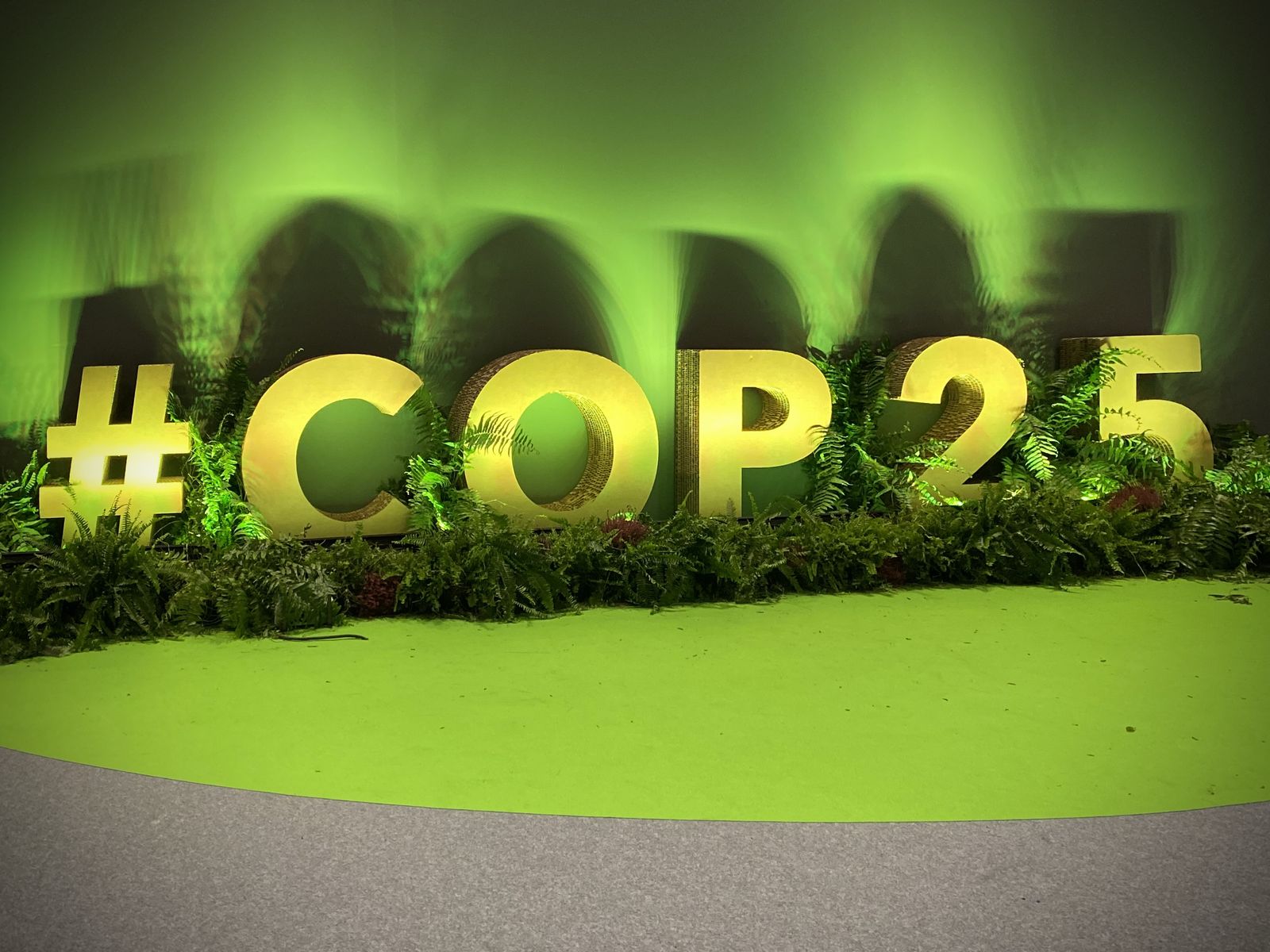 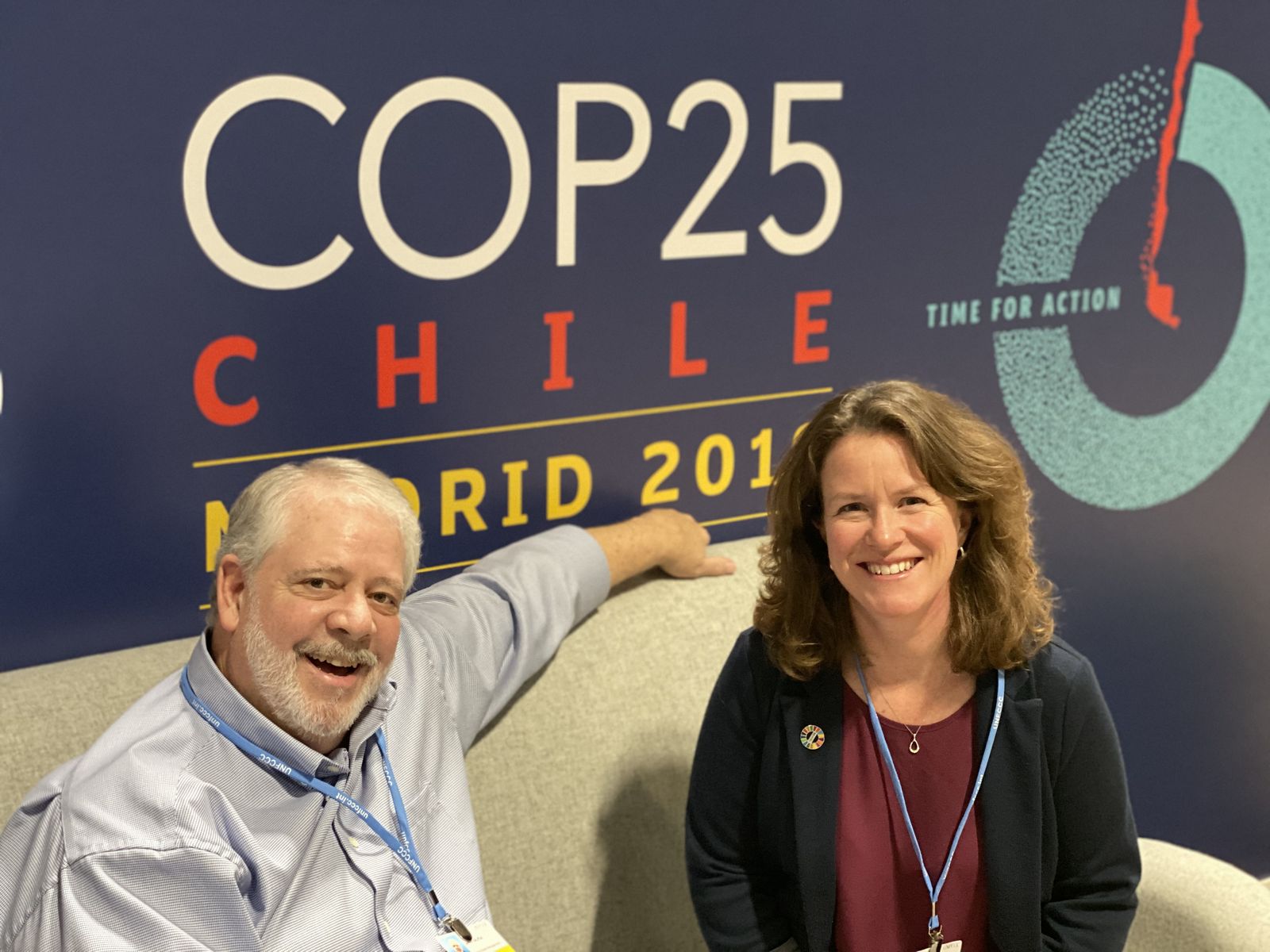 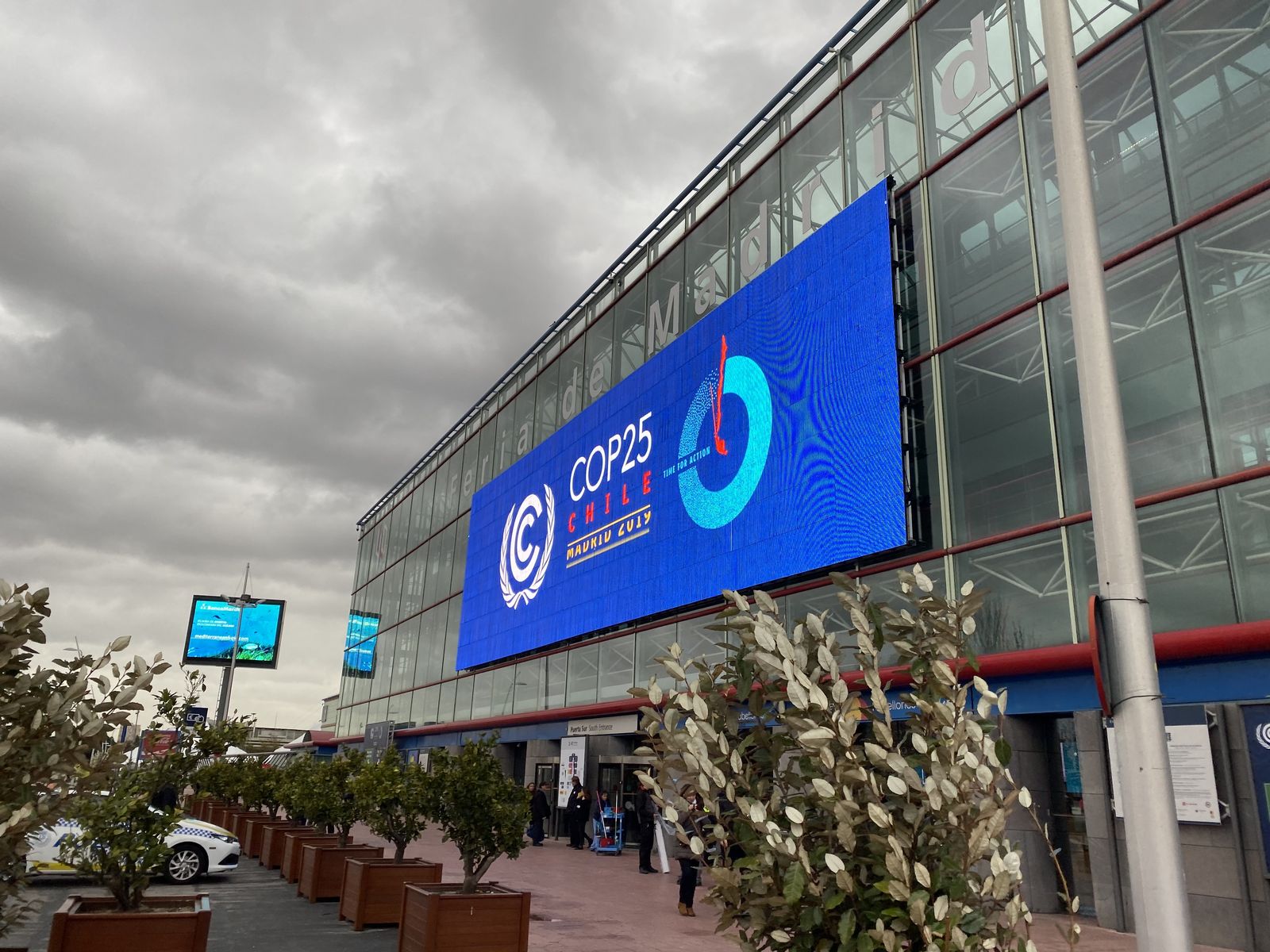 Today, we hit a few sessions and spent some time perusing the exhibit booths (look for pictures of those in a later blog update).  Our summary today covers three technical sessions: Global Climate Action – What we are doing, and what we need to do.  The 2019 Yearbook.
Reported by:  Michele Gehring, A&WMA President 2019

The UN and the Marrakech Partnership for Global Climate Action prepared a yearbook report for 2019, summarizing the progress made to date and the actions required to keep global temperature rise below 1.5°C.  The Marrakech Partnership for Global Climate Action was launched at COP22 to bring the power of non-Party action to the forefront and help increase the pace and ambition in the pre-2020 period.  This is the third yearbook published by the group.  Download a complete copy of the yearbook
The presentations in this session reviewed key highlights from the yearbook, organized into each of the Climate Action Pathways established by the coalitions and initiatives of the Marrakech Partnership.  The Climate Action Pathways outline the longer-term vision for a 1.5-degree climate-resilient world and set out actions needed to achieve that future.  They are intended to provide a big picture overview of the transformational actions and milestones across each of the eight pathway groupings.  The data in the pathways is scientific based and is intended to provide technical ways of achieving and measuring ambition.  Below are the updates provided by each of the high-level champions: Following the five-minute stocktake reports from each sector, a panel discussion was provided with experts from the Bahamas, the University of Cantabria, Danfoss, and the Ministry of Europe and Foreign Affairs.   The group concurred that the pathways are helpful because they are more concrete than previous maps.  Having spent some time looking through them, I would concur. They read much more like and engineering action plan than a narrative for a newspaper.  However, the group stated that some of the targets established in the pathways are very far stretches (the word “dream” was used) in that they require an almost unimaginable change over a very short period of time.  Part of the basis provided for that was that all of the indicators that climate groups have been measuring and basing goals off of are now accelerated, making the pathway to achieving the goals more complicated.  Because of this acceleration, the group indicated the pathways may need to be modified.
There was also a discussion on the need for industry and citizen buy-in with the pathways to make real achievements and establish enhanced NDCs in 2020.  With industry, the challenge seems to be balancing change with provide.  According to the Danfoss representative, if industry continues to sell and have profit with the current operations, the only way to drive change will be by regulation.  For citizens, proper communication and understanding is the challenge.  Not only is it difficult to make the citizens feel and see the personal effects of climate change, explaining the complication of the solution to them is challenging as well.    Carbon Neutral Transitions and Standards as a Measure, Reduce, Compensate Toolkit
Reported by:  Michele Gehring, A&WMA President 2019

This session was a panel session, with brief presentations provided by each panelist.  Speakers included representatives from the Government of Costa Rica, the UNFCC, IEM, ISO, IAF, and ICAO.  The session discussed the ISO standards, their applicability to climate change measurements and policies, and how to use the standards to analyzer data and develop reduction/mitigation plans.  Three main steps were discussed: For each, they referenced ISO standards that can be used to assist in the evaluations.  For measurement of the carbon footprint, three standards were discussed: For third party approval, two standards were discussed: For communication of GHG emission projects, one standard, ISO-14020, was referenced to provide guidance on communicating environmental labeling and declarations.
A case study was presented of how these standards had been applied and utilized for a Decarbonization Plan in Costa Rica.  The original goals for the plan were set in 2007 and the plan was just finalized in a revised version this year.  (Side note – Costa Rica is all over this COP meeting, doing presentations in or being referenced in virtually every side session that I've sat into date).  With an ultimate goal of zero net emissions, Costa Rica presented a plan of action for companies to obtain a carbon neutral certification or brand and how the various ISO standards are included in that certification process.  The plan is a five&‘step process: To encourage companies to proceed with the program and provide a recognition of each stage in the process, Costa Rica has established a brand/certification stamp for each of the above steps.  In addition to the program they have established for companies, Costa Rica is now working on a similar program to certify goods and services.  (Note that is in line with the conceptual program summarized in the Action Hub discussion I summarized yesterday, but it is well more developed, albeit limited to Costa Rica).  For the goods and services program, the process will be largely the same, however, a recertification will be required every 3 years.  Accreditation will be provided via ISO-17029 and ISO-14065; ISO-14026 (2017) will be used for guidance on use of the resulting brand labels.

Following Costa Rica's summary of their programs, the UNFCCC representative spoke about the role of voluntary GHG management initiatives in their Climate Neutral Now program.  In introducing the program, the representative explained that the UNFCCC chose the phrase “Climate Neutrality” to make it clear that the program is about the impact on climate and is much more than just reducing CO2 emissions.   Through the use of carbon markets, the program strives to incentivize support for action, accelerate a transition to a low-carbon economy, and mobilize investment from the private sector and individuals.   The voluntary initiatives are intended to provide recognition, visibility and credibility and to increase outreach and participation.  Launched at the end of 2015 and open to both individuals and organizations, the program: Housed within the web framework for the Climate Neutral Now program is: The Carbon Offset Platform on the website is free to use for all companies.  The calculator is a very simple calculator.  The speaker commented the extent of the calculator may not satisfy academics but was focused to be easy to use rather than to have multiple layers and levels of complexity. Strengthening Climate Promises:  Action on Air Quality to Enhance NDCs
Reported by:  Michele Gehring, A&WMA President 2019

This session was focused on the Global Methane Alliance (GMA) and was headlined by a representative from the Nigerian government and the scientific director from IASS (Institute for Advanced Sustainability Studies).  Nigeria joined the GMA in November and is committed to actions to reduce methane in oil and gas production.  The IASS director categories such an alliance as both full of promises and potential perils.  He indicated that NDCs bring commitments to a national level, which is important.  However, without solidarity and commitment across the board, such a program will fail.  He brought the room to a bit of a silent pause when he said “…In all honestly, we need climate change.”  He then went on to explain that the climate he was talking about is the socio-cultural climate.  In his opinion, a climate in which there is an overreaching care not only for ourselves and our own priorities but for others as a whole throughout the world, is the type of climate that is needed for real success.  He stated such a change will lead to faster collaboration and progress.
Following the impassioned opening, a representative from the Climate and Clean Air Coalition spoke more directly about the impacts of air pollution on the climate and human health.  He said often when talking about air pollution the focus is on breathing effects, but when you look closer at the studies, the impact is much more.  He provided the following statistics relative to air pollution health effects (note I have not verified these facts specifically): He then turned the focus to short term climate pollutants, in particular methane, indicating that half of today's warming is from STCPs.  He stated that we can avoid 0.6°C of the increase just by controlling air pollution and STCPs.
His introduction to the topic was then followed by a presentation from the Environmental Defense Fund that focused specifically on methane.  Pound for pound, methane traps 86 times more heat over 20 years than does CO2.  While methane has a huge potential as a fuel, it is a major threat to the climate.  She provided the following quote from a leading EDF climate scientist:

"Carbon dioxide dictates how warm our planet will get…methane determines how fast.  Both deserve attention."
With that, she indicated that the EDF thinks a paradigm shift is needed, with a focus on the oil and gas sector.  She quoted the oil and gas industry as emitting around 75 million metric tons of methane in countries all over the world, with North America emitting 289 tons and being second only to Russia, who was quoted at emitting 387 tons.  I found it interesting that the third highest emitter was Uzbekistan with 97 tons, a country that very few Americans could probably find on a map.  She stated that if we could reduce methane emissions by 40 to 45 percent, it would be equivalent to closing 1/3 of the coal plants in the world.  In general, EDF studies have found that these reductions are not only more effective, but are also much cheaper than other climate change options.

As an example of how much of an impact methane reduction can have, she provided a case study from a leading gas producer in Pinedale, Wyoming (Jonah Energy).  The company cut methane emissions by 75 percent by implementing a leak detection and repair program in their gas fields.  The company quoted the program as a success, indicating that they were not performing less maintenance and were retaining more gas in their system.

Thank you Michelle and Jeff for the in-depth commentary and updates. I'm happy to see you two representing A&WMA. Great job!