Jack reports on a session he attended on December 12 at COP25 in Madrid about how businesses can support governments as they work to enhance their NDCs. He also discusses the review given by the COP25 President regarding the state of the conference negotiations.

I attended another interesting session today, hosted by NDC Partnership, on the role of business in supporting governments to meet their NDC obligations. The Director of Sustainable Growth for the International Chamber of Commerce (ICC) moderated the session, beginning with a brief discussion to set the context for the conversation.  The panel was primarily composed of representatives of business organizations, including financial institutions.  Specifically, the moderator indicated that ICC already seeks to bridge the gap between countries and their NDCs, and there is currently a shortage of involvement by businesses in this space. 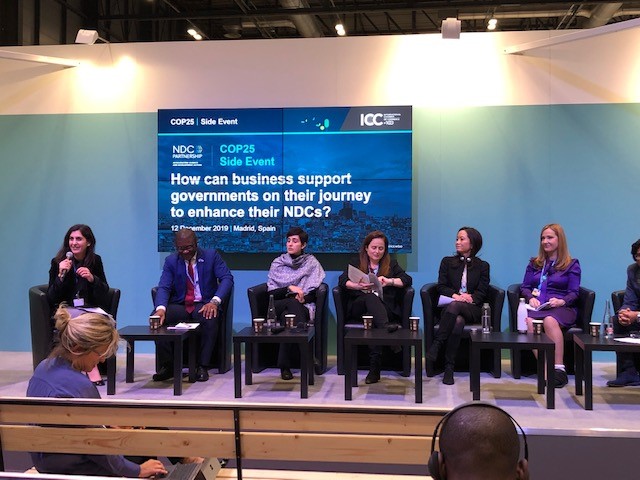 Another speaker, from the NDC Partnership, indicated that future issues relative to fulfilling countries' NDC obligations (and indeed going further) include the debt these countries are incurring and the speed by which they can implement these efforts.  A real question in his mind is, “Can the private sector be expected to reinvigorate the ambition that is needed (and called upon) here at the COP?”

Additional speakers reiterated the fact that the private sector will be fundamental to the enhancement of NDCs.  The remaining speakers also emphasized the need for the COP to complete the rulebook and Article 6 so that (hopefully) a global price on carbon can be established.  Of course, this remains to be seen.  President Stock Taking Plenary 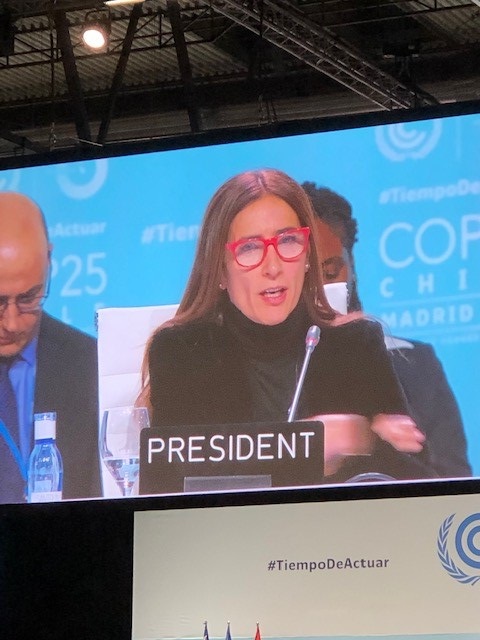 Finally, I listened to the President of the UNFCCC, Carolina Schmidt from Chile, review the state of the negotiations of COP25.  She expressed both her optimism and disappointment in the negotiations to date.  Optimistically, she is encouraged at the progress that has been made in the negotiations.  However, she expressed her disappointment in the Council of Parties not being able to complete the negotiations relative to Article 6.  This element of the Paris Agreement establishes the underlying structure allowing countries and private parties to establish emissions reduction efforts and trade them amongst parties.  Ultimately, this is believed to be crucial in creating a successful international system of carbon reductions and putting a price on carbon.  Ms. Schmidt called upon several countries that stated their concern at the state of negotiations as well.  I was particularly struck by the comments made by the island nations – they are genuinely concerned that, unless an agreement is reached and significant GHG emissions reductions are implemented, their future livelihood will be in question.